Blat Pack has taken its first step in getting up and running with the opening of our website. This has come off the back of an awesome weekend down at the Island for the 2017 MotoGP.
While there, we got the opportunity to spread the word about Blat Pack. A common question raised was, could we do anything about custom apparel, mugs, stubby holders etc that was based on someone's own bike or car?
The short answer is yes! We will provide more details on this when we crack open the doors of the on-line shop on 11 November 2017, so keep an eye out for details.

There is no part of the Phillip Island circuit that isn't brilliant to watch MotoGP. Just a few examples are the super smooth, lean angle carried through turns 11 and 12 onto the main straight, watching Jack Miller pin it onto the start of the Gardner straight under the first Melbourne banner with the bike shaking its head like a freshly bathed pooch as he drifts out onto the ripple strip and disappears down the straight like a dart, or even the wheel spinning, physics defying, throttle control through Stoner corner…it's all mega!However two of my favourites were off the hook this year.

For ‘Free Practise One’ I always try to get to turn one and get reacquainted with the ballistic entry speeds these banzai magicians can conjure. You immediately realise these guys are exceptional.

The other is Siberia and the change of direction at The Hay Shed before running the blind accent of Lukey Heights. The changing conditions provided solid rain for Free Practise 3 and the feel these guys displayed in putting down the power through that section manifest in the rooster tail of spray they left in their wake - awesome stuff! 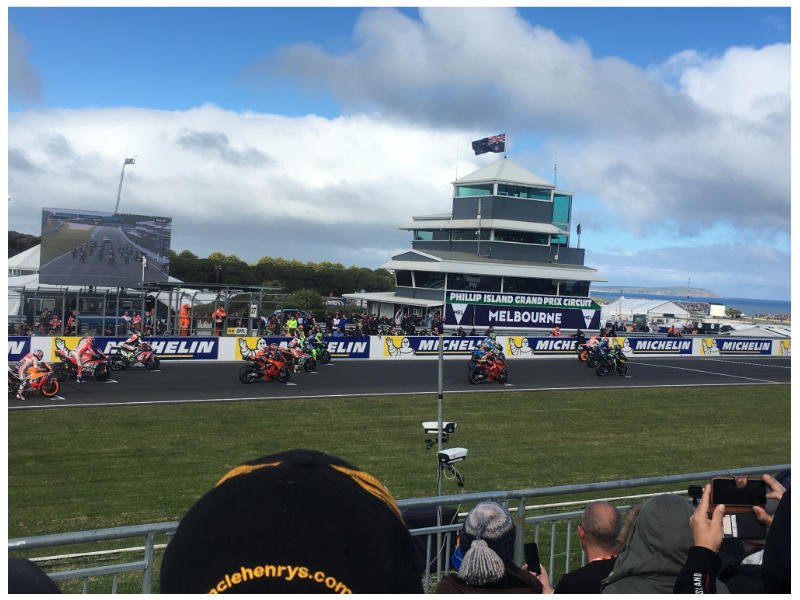 The race didn't disappoint. In the same way that you can't have bad beer or pizza, just better....the Island can't deliver a bad race, and we were served up the best race of the year by far!
Miller had been fast all meeting regardless of the conditions and the start he made got the crowd up and about. Vale was outstanding and the cut and thrust between the leading contenders lasted all race.
Vinales kept Marquez and Vale honest, while Inannone lived up to his "Maniac" nickname, shoving his nose (and bike) up in everyone else's business.
In the end, Marquez showed his class and took the win by a comfortable margin from Rossi followed by Vinales.
Race day threw up seriously sketchy conditions for the morning warm ups with Moto 2 copping the worst of it. The crowd then settled into a game of "rain coats on...rain coats off". I took 45 seconds off my PB for kitting and de-kitting my wet weather gear.
Moto 3 saw the crowning of new a world champion in Joan Mir; Oliveira ran dominant at the front of Moto 2 with Morbidelli doing what he had to with two rounds to go.

Well all that's left now is the ride home and to start planning for next years MotoGP. Safe riding to those making the run back - keep it shiny side up.
As for Blat Pack in addition to the shop starting up on the 11th we have a bunch of events coming up that we will be checking out - so keep checking in with us here at the Pack!